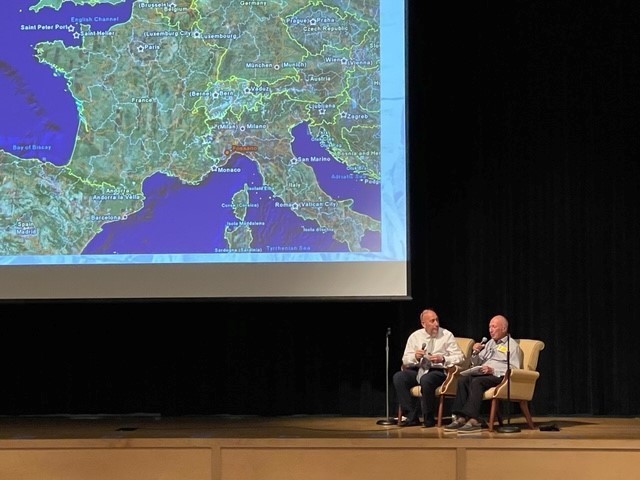 In 1994, the Florida Legislature passed the Holocaust Education Bill (SB 660), which amended Section 233.061 of the Florida Statutes (s. 1003.42(g), Florida Statutes) relating to required instruction. The law requires all Florida school districts to incorporate lessons on the Holocaust as part of public school instruction in grades K-12.  The Florida Commissioner of Education's Task Force on Holocaust Education promotes instruction and awareness, providing programs in all Florida school districts and coordinating designated events that provide appropriate memorialization of the Holocaust on a regular basis throughout the state.

As part of its implementation of required instruction for high school students, the Martin County School District recently invited Mr. Louis Schneider, a survivor of the Holocaust, to speak with students about his experiences during this horrific time.

Mr. Schneider was born in Belgium in 1934.  Although many Holocaust survivors share their heartbreaking stories of concentration camps and life in Eastern Europe, Mr. Schneider chooses to share his harrowing experience as a young child in a family desperately trying to stay one step ahead of the Nazi regime.  After his father was shipped to Auschwitz Concentration Camp, he—along with his mother and sister—tried to evade the enemy throughout Belgium, Southern France and Northern Italy.

After the war and miraculously being reunited with his father, the Schneider family immigrated to the United States in 1948. They became naturalized citizens in 1954 and resided in New York.  Mr. Schneider studied Biochemistry and Microbiology as an undergraduate and graduate student, performing work with the U.S. Military.  He then earned his Juris Doctor and practiced international trade law, representing many German companies.  Besides English, Mr. Schneider is fluent in French, Italian and German.

After retiring and relocating to Florida in 2000, Mr. Schneider worked with the Holocaust Documentation Center in Miami and the Holocaust Museum in Washington, D.C.  His goal is to continue to tell his story as long as he is able.