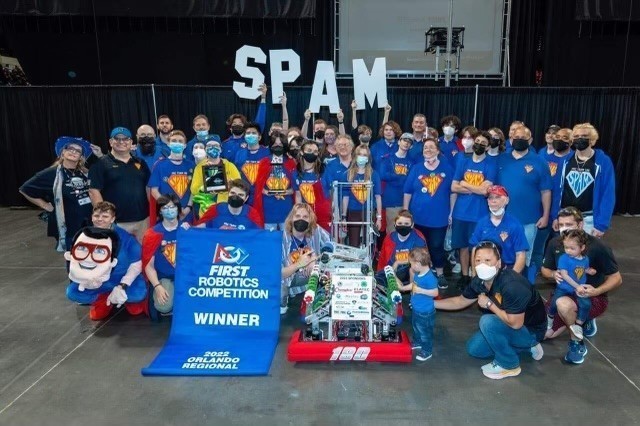 The following article was contributed by FRC Team 180 S.P.A.M.:

FRC Team 180 S.P.A.M. Robotics, a high school robotics team made up of students from the Martin County School District and Martin County's 4-H program, entered the Orlando Regional FIRST Robotics Competition held March 9-11 with high expectations and pressure. Could the team pull off a win against 57 U.S. and international teams after not being able to compete at an in-person event since 2019?

The answer was a resounding "yes!" S.P.A.M. dominated their matches and entered elimination rounds as an undefeated team seeded at the number two spot. Team Captain Lizzie Vanhooser, a senior at South Fork High School, accepted an offer from the number one seeded team, Riviera Beach's Team 179 Children of the Swamp, to form an alliance team for the finals. Both teams joined forces with Team 7072 OGRE out of Alabama to sweep the elimination rounds,  continuing their undefeated streak and winning the gold at the University of Central Florida's Financial Addition Arena in Orlando. The victory ensured S.P.A.M. had punched its ticket to the FIRST World Championship, scheduled for April in Houston, Texas.

But the winning didn’t stop there. At closing ceremonies, S.P.A.M. was awarded the “Autonomous Award” sponsored by Ford Motor Company. This award is given to a team that has demonstrated consistent, reliable, high-performance robot operation during autonomously managed actions. Evaluation is based on the ability of a team's robot to sense its surroundings, position itself or onboard mechanisms appropriately and execute tasks.

Established in 1989, FIRST was created to design accessible K-12 Science, Technology, Engineering and Mathematics (STEM) education programs that use robot challenges to build students' skills and interest in these fields. The program is character-driven and inspires participating students' self-confidence, leadership, and life skills. The FIRST Robotics Competition is a program that challenges high school students—working with professional mentors—to design and build a robot to contend in competitions that measure effectiveness, the power of collaboration, and students' determination. This year, S.P.A.M. is comprised of 36 students who attend Jensen Beach High School, Martin County High School, South Fork High School and other area schools.

S.P.A.M. depends on the generosity of businesses and individuals throughout the Martin County community, as well as sponsorships issued by Chemplex, Elatec, FPL, Doolittle Institute, Pratt and Whitney, Lockheed Martin, Aerojet Rocketdyne, Martin County 4H Extension Office, and The Education Foundation of Martin County.  Those interested in helping the team travel to Houston may donate by clicking here.  Donations should include "MCFRC - 180 S.P.A.M." in the comments section. For more information, please visit www.spamrobotics.com or email FRCTeam180@gmail.com.