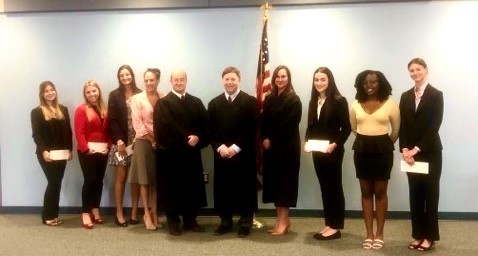 In partnership with the Center for Constitutional Values' Scholarship Fund and the YMCA of the Treasure Coast, the Martin County School District conducted the seventh annual “Constitution Academic Competition” finals round this week.   The event built upon a previous round of competition by which students from each District-operated high school debated the U.S. Supreme Court case Miller v. Alabama.  The case addressed the constitutionality of enacting life sentences without parole for juveniles convicted of capital crimes. The students were randomly assigned to advocate a position during the first round of competition.  In the finals round, the winning team from each high school advocated the opposing position they had previously argued before presiding judges: the Honorable Darren Steele (19th Judicial Circuit Court), the Honorable Jennifer Alcorta Waters (19th Judicial Circuit Court) and the Honorable Alan O. Forst (4th District Court of Appeal).

Although all of the students eloquently and effectively articulated their positions, the presiding judges were tasked with determining debate winners for each school.  Congratulations to the following students: