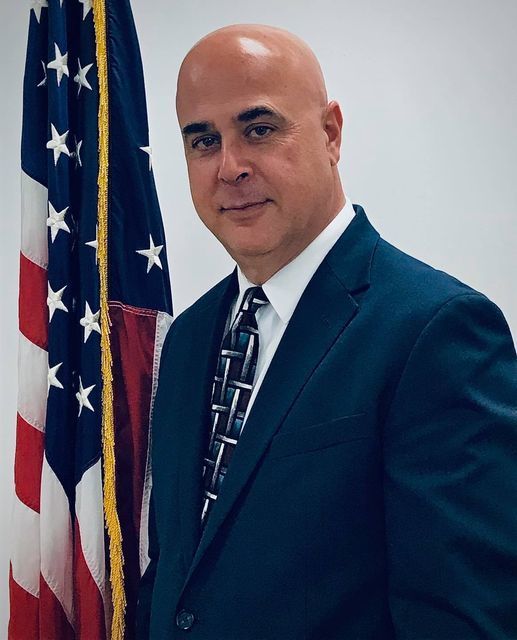 Mr. Frank Frangella, Director of Safety and Security, served 20 years with the New York City Police Department (NYPD) before joining the Martin County School District in 2018. He was a first responder to the tragic events that unfolded on September 11, 2001. "I Was There" is his story.

I was there during the horrendous attacks that occurred on September 11, 2001. At that time, I was a police officer in the Brooklyn South Auto Larceny Unit within the New York City Police Department (NYPD), assigned to the midnight shift. It was a regular day off (RDO) and I was sleeping peacefully. At some point, my wife abruptly woke me up to inform me that a commercial airplane had flown into one of the twin towers at the World Trade Center. She nervously stated, “Rome is burning and you’re sleeping.” I already knew what was happening - a terrorist attack. I dressed with the news on in the background and quickly readied myself, knowing exactly where I needed to be. I asked my wife to go get our daughter out of school and bring her home just in case. She noticed that I was dressed, and with a puzzled look asked me, “where are you going?” “I’m a cop. I need to go in,” I responded. The look on her face told me she did not realize or expect that I would have to go. I walked out the door not knowing if I would ever return.

By this time, the NYPD had a full recall of personnel with staging areas throughout the City. I was closest to the 122nd Precinct in Staten Island. On the short ride to the precinct, fear, horror and anger were going through my mind. I did not know what was in store for me. As I arrived, with my other brothers and sisters in tow, I noticed my unit lieutenant standing by the inside door, holding a detail roster (a form the NYPD uses to keep track of assigned personnel at major events). As he greeted me, I felt a sense of relief seeing the familiar face of my boss whom I looked up to. He put me on his roster and told me our orders were to respond to the Staten Island Ferry terminal and escort the injured coming from the scene.

A temporary trauma center was set up at the base of the terminal to triage the injured coming off the ferry. There were expectations of large numbers of casualties coming across the waters from lower Manhattan. As the ferries began pulling to the docks one after another, it quickly became apparent that no one- not a single injured person or anyone else - was on board. We realized that no one would be coming. We then decided to take the next ferry heading to the City and go to the scene. It was late afternoon/early evening when we arrived.

Although it has been many years since, I can still vividly remember the horror I witnessed upon arriving. It was a true war zone. For the next 20 hours or possibly more, we took turns on the bucket brigade, taking away debris in hopes of finding someone alive beneath the rubble. There was no structure or direction attached to the rescue efforts – we were just told to dig. As I stood on this massive pile of rubble and debris which was once home to two of the largest buildings in NYC, I remember thinking to myself that not a desk, phone, or anything resembling an office was visible. Everything - including the souls lost - was reduced to dust.

Every so often, the brigade lines paused, and everyone stood at attention as another person was tragically found deceased. After approximately two weeks of working 12 hour+ days, I finally had a day off. Every emotion bottled inside of me finally surfaced and I just remember breaking down, crying. Mostly for the lives lost and for the horrors I witnessed, but also for myself. For the first time in my life, something had frightened me very deeply. I ultimately ended up spending the next three months at Ground Zero (as it came to be known) assigned to various duties as the rescue attempts turned into a recovery mission. I was eventually assigned to securing the perimeter of a crime scene.

It is said that time heals all and memories fade, but I still wait. On this day that marks the twenty-first year, all I ask is never to forget!